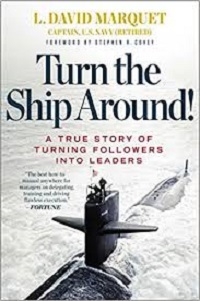 “Turn the Ship Around!”

Many drivers have a tough time parallel parking a car or conducting a proper K-turn.

Imagine actually turning this ship around? 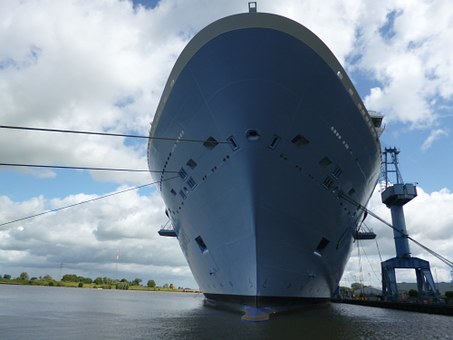 Well, do you ever feel like your business is a mammoth ship that needs turned around?

Especially those companies that have been around for a long time.

In particular, manufacturers that have layers of processes and systems.

Long existing businesses suffer with Sacred Cowititis (I just made that up – sounds like a future blog).

You know, those dreaded sacred processes that nobody has the time or energy to change.

Yet, you want to change, but how?

Just to take that first step, most of us need a playbook.

Well, we have just what the doctored ordered.

To turn your ship around, grab a copy of the amazing book, “Turn the Ship Around!” by author L. David Marquet.

Turn the Ship Around!

“Turn the Ship Around” is an AMAZING book on leadership, team building and accomplishing organizational goals.

Disrupting processes in a bureaucratic organization such as the Navy certainly makes waves (sorry for the pun, I couldn’t help myself).

Yet, Marquet did just that.

He took over the leadership position of a submarine that had struggled for many years.

Check out this video describing “Leadership on a Submarine”:

About the Author: L. David Marquet

Captain Marquet graduated from the Naval Academy in 1981.

Then served in the U.S. submarine force for 28 years. Marquet was assigned the nuclear powered submarine USS Santa Fe, which at the time was ranked last in operational standing and retention.

To “Turn the Ship Around”, he took a new approach to turn the last place ranking into first. He did so by treating his team as leaders and granting autonomy and control.

Shifting from the traditional “take control, give orders” approach, Marquet’s crew achieved the highest retention and operational standing in the Navy.

Below includes an excerpt from “Turn the Ship Around” the describes Marquet’s leadership philosophy:

“W. Edwards Deming lays out the leadership principles that became known as TQL, or Total Quality Leadership. This had a big effect on me. It showed me how efforts to improve the process made the organization more efficient, while efforts to monitor the process made the organization less efficient. What I hadn’t understood was the pernicious effect that “We are checking up on you” has on initiative, vitality, and passion until I saw it in action on Santa Fe.”

After David’s departure from the ship, the Santa Fe continued to win awards and promoted a disproportionate number of officers and enlisted men to positions of increased responsibility, including ten subsequent submarine captains. Furthermore, upon visiting Marquet’s ship, best selling author Stephen R. Covey said it was the most empowering organization he’d ever seen. Covey was so impressed, he wrote about Captain Marquet’s leadership practices in his book, “The 8th Habit”.

Marquet concluded his illustrious career when he retired from the Navy in 2009.

Check out this video from David Marquet on “Turn the Ship Around”:

Quotes from “Turn the Ship Around”

Lastly, below includes a list of challenging questions that Marquet asks:

Thank you for reading our post. To learn more about Falconer Electronics, check out these helpful links below: